We encourage new members to join us!

The Origin of the Hudson-Mohawk Volunteer Firefighters Association

In 1924, the Annual Convention of the Hudson Valley Volunteer Firemen's Association was held in the City of Hudson. Mr. Raymond V. Sutherland was elected as a County Vice President to represent Albany County. The County Vice Presidents were tasked with organizing county groups or associations within their respective counties to speak about fire prevention, to create new fire companies and to bring in new members to join the Hudson Valley Firemen's Association.

Outside of the City of Watervliet, there were few volunteer fire companies in Albany County. On 4/25/27, a fire occurred on part of the Old Shaker Colony near what is now the Albany County Airport. Apparatus and manpower from the City of Albany Fire Department, the Latham Fire Department and the Menands Fire Department responded. Fifteen buildings were lost at an approximate value of $100,000.00. This fire was used to bring the need for fire prevention and various fire protection into the public view. As a result of newspaper write ups, interest was generated and meetings were held in various communities.

On 10/10/27, a meeting was held at Albany Fire Hook & Ladder No. 4 located on Delaware Avenue. As a result of this meeting, the Albany County Volunteer Firemen's Association was formed. Raymond V. Sutherland was elected as the first President of the association.

On 10/24/27, the second meeting was held at the Ravena Fire Department. A slate of permanent officers was elected at this meeting.

A third meeting was held at the Menands Fire Department. The Association was comprised of ten companies and thirty individual members. Meeting procedures were laid down and regular meetings, conventions and bylaws were discussed. Monthly meetings were to be held on the third Tuesday of each month.

The 1st Annual Convention of the Albany County Volunteer Firemen's Association was held at Menands in August, 1928.

The 3rd Annual Convention of the Hudson-Mohawk Valleys Volunteer Firefighters Association was held in Schenectady at Company No.10 quarters in July, 1930. The word "Valleys" was dropped from the Associations title.

The 10th Annual Convention of the Hudson-Mohawk Volunteer Firefighters Association was held at the Delmar Fire Department in July, 1937. Permission was requested by Raymond v. Sutherland on behalf of his daughter Mrs. Delores S. Meyers to form a Ladies Auxiliary to the Hudson-Mohawk Volunteer Firefighters Association (In October, 1937 at the Fuller Road Fire Department, the Ladies Auxiliary was organized and Mrs. Delores S. Meyers was elected as the first president). Our slogan was to have 100 member companies and 1000 individual members. The "Resume" paper was approved for publication. This paper outlined what had transpired at meetings and where the next meeting was to be held. In November, 1948, the "Boosterline" replaced the "Resume" and is still published by the Association today. The paper features articles, upcoming events and news from member companies and associations located throughout the Hudson- Mohawk Volunteer Firefighters Association and Ladies Auxiliary region.

Note: Information for this history was taken from the writings of Raymond. V. Sutherland, our first president , who is recognized as the founder and organizer of our organization.

The year 2020 was a year like no other. All in person get togethers were somewhat or totally non-existent for many organizations. Hopefully, we are starting to see the light at the end of the tunnel and we can "get back to business" soon. In the meantime, HMVFA will be sending out our annual dues notices to all members in the coming weeks. Please contact Financial Secretary Phyllis Dinkelacker at HMVFAfinsect@gmail.com if you have any questions regarding dues notices.

It with deepest regret that the presidents and officers of HMVFA announce the passing of HMVFA Past President, Firemen's Home Trustee and Hudson Valley 2nd Vice President, Walter "Bill" Eck, Jr.

The wake will be held on Wednesday, March 24th between the hours of 4:00 pm- 7:00 pm at St. Thomas the Apostle Church, 35 Adams Place, Delmar, NY 12054. Masks and social distancing are required (even if you have been vaccinated).

All members of HMVFA are please asked to wear gray coats if possible. Please meet in the church parking lot at 6:00 pm. Combined firematic services will be held at 6:30 pm. There is additional parking across the street at the school.

Funeral services will be held on Thursday, March 25th at St. Thomas the Apostle Church at 9:30 am and will then proceed to Calvary Cemetery located on Route 9W in Glenmont.

Please click on the link below for the obituary:

Please keep the Eck family in your thoughts and prayers at this most difficult time. As soon as information on services is available, we will pass the information along.

Please check out www.ColumbiaPage.com for all allowable events happening in Columbia County 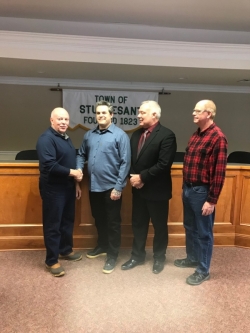 Copyright © 2006-2021. YourFirstDue Inc. All Rights Reserved. Designated trademarks and brands are the property of their respective owners. Content on this web site is supplied by Hudson-Mohawk Volunteer Firefighters Association. YourFirstDue Inc. cannot be held responsible or liable for any content, text, pictures, or any other media found on this web site. Maintained by the members and staff of Hudson-Mohawk Volunteer Firefighters Association.
Management Login
Powered by